The Business Team Academy: a Bachelor’s degree where students take the lead

The Team Academy uses a unique educational model, which originated in Finland. This means that students at the HES-SO Valais are invited to put together a tailor-made academic program, built around real-life projects. Using this model means that there are no teachers in the traditional sense, no course grids or ordinary exams, but instead there are coaches available, who will act as teachers on request.

You might not have expected to see this type of program in an institution as academically focused as the HES-SO, or in connection with a Bachelor’s degree in business management. However, this project has been active since 2017 at the School of Management in Sierre. It took two years to set it up and to convince the various authorities that the 23th version of the proposal should be accepted.

The twenty or so students in each group develop and run entrepreneurial projects while professors are brought in to help on request, as the year is progressing. The students, also called “teampreneurs”, start by creating a Team Company within a real legal entity and with validated statutes. The companies Andromeda and Noventid, as well as the associations CoCrea and Evodea, have all been created since the launch of the project in 2017. Each of these Team Companies manages a portfolio of projects set up and launched by the teampreneurs, and they all generate revenue. Among the different projects, the “24-hour customer”, similar to the Startup Weekend model, makes collective intelligence available to businesses for an approximate fee of around CHF 1,000 to 2,000. The client then pays according to what they feel they’ve profited from it.

As the projects are evolving, the students are expected to develop their skills and progress in a framework consisting of 21 competences that have been predefined for the 3 years. These skills include both “hard skills” such as marketing and finance and “soft skills” such as creativity, interpersonal communication and team learning, all of which are increasingly attractive to the job market.

A Disruptive approach that also incorporates the theoretical aspect

The theoretical dimension very much still exists within this framework and there’s therefore a target of six individual assignments and three reflective articles per semester. The Team coach shares his feedback and validates the submitted work, as well as the project reports. Depending on the scope of the different projects, professors are called in accordingly to help provide theoretical background through specific training sessions. On the basis of an “individual learning portfolio”, a full day is dedicated at the end of each semester to a 360° evaluation including self-evaluation, peer evaluation and an expert panel. Knowing how to evaluate yourself and “learning to learn” are also part of the “soft skills” targeted by the program.

This program is quite disruptive in its approach and it requires students to step out of their individual comfort zones. These young people who are ready to take the plunge are still in the minority. They’ve been successful in the mainstream system, so why change now? It can be difficult to get into an educational model that emphasizes autonomy and responsibility, but the outcome in terms of student involvement is an incredible success. They’re proactive, they ask questions, they’re much more attentive to theoretical concepts, because they’re able to identify their application within their real-life projects. 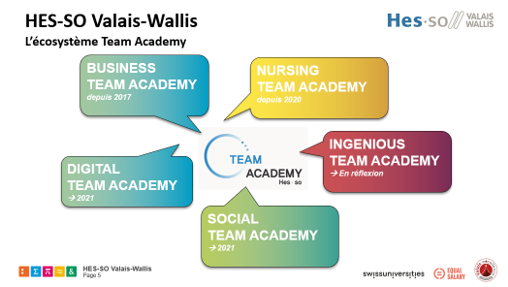 A Team Academy ecosystem in Valais

This program has now been running for 4 years and has seen the first 20 Business Team Academy graduates. The initial fear we had prior to launching this unorthodox model, where we thought everyone might want to opt for an easier bachelor’s degree without classic exams has not been realized. Less than 20% of our young people are ready to move towards this type of learning model, which requires a large degree of personal commitment. Also, for a large majority of the Team Academy candidates, the traditional pathway wasn’t even an option they considered, as they came to the HES-SO purely for the Business Team Academy curriculum. This pioneering program in Switzerland therefore makes it possible, on the one hand, to broaden the entry profiles to the School of Management and, on the other hand, to offer the job market diversified profiles, particularly in terms of the “soft skills” acquired and developed during this type of course.

Since “learning to learn” is at the heart of this educational model, each student develops self-management skills and a strong entrepreneurial spirit which encourages them (for 40 to 50%) to create their own job (self-employed, start-ups, entrepreneurs, etc.) after their Bachelor’s degree. By comparison, only 3 to 5% of traditional courses graduates take the entrepreneurial route after completing their studies.

From now on, the “Team Academy” learning model will also be deployed in other courses at the HES-SO Valais, hereunder the Nursing Team Academy, which was launched last year. During the 2021 academic year, the Social Team Academy and the Digital Team Academy will also be launched. We can now begin to talk about the emergence of a real Team Academy ecosystem in Valais, an ecosystem that focuses on 6 key skills that are universal to all the relevant fields: “learning to learn”, “team learning”, “managing your own development”, “developing leadership skills”, “daring to innovate and being agile”, “sustainable entrepreneurship”.

Launched in 2017, the Business Team Academy  (a curriculum of the HES-SO Valais of Sierre) offers a unique bachelor’s degree in Switzerland. Based on the implementation of projects from the first day of training, the program includes the skills profile of a business economist over 3 years.